The "Theologisches Alumneum" is a church foundation based in Basel.

The foundation aims primarily to offer students of theology, but also students of other fields of study, inexpensive accommodation, to provide material help where necessary and to give them the opportunity to participate in a house community that is committed to basic Christian values.

The Custodian is responsible to the Foundation Council for its management.

From the history of the Theological Alumneum Basel

Most of the students entering the newly founded University in 1460 were under 20 years of age, many only 12-14 years old. There was no age limit and no access check as a precondition. The only thing the pupils had to know was Latin, and they had to rent a room from a teacher or in one of the Bursen. These Bursen offered not only food and lodging, but also lessons in the sciences of the Artist Faculty by Magistri. The Bursen thus corresponded in a certain way to today's grammar schools. The Bursen declined over time and were not reopened after the closure of the University from 1529 to 1533.

After the reopening of the University, the deputies responsible for church and school founded an Alumnat / Alumneum on behalf of the City Council of Basel. 24 students were selected without regard to status and wealth to be trained as capable servants in church, school and state. The Collegium Alumnorum or Collegium Erasmianum was located in the Predigerkloster, his successor in the Augustinerkloster.

In the three hundred years that followed, this Old Alumneum had many depths (Wagner 1994, 8f.). The hopeful new beginning with Wilhelm M. L. de Wette,   professor of theology, in 1828 ended in the confusion of separation in Basel in the 1830s. Due to the catastrophic financial situation, the previous foundation fund was abolished by the Regenz of the University in 1838. With the council decision of 1843 to build the Natural History Museum on the site of the Augustinerkloster, the end of the Old Alumneum was sealed.

In 1844, on the initiative of Antistes Jacob Burckhardt, professor of theology Karl Rudolf Hagenbach and councilman Andreas Heusler, a conference was held with the aim of founding a new Alumneum organised under private law. The call for the foundation brought more money than had been hoped for.

"In a suitable house, a number of students of theology were to be united in a house community under the direction of a capable housefather. Not only should they receive their housing and food here together, but at the same time they should be protected from the dangers of an overly individualistic or one-sided intellectualistic study by living in a Christian family. The housefather had a great obligation to smooth the not always easy path through theological studies, both internally and externally. (Frei 1944, 12.)

The first house parents, Pfr. Wilhelm Legrand and Mrs Ursula, were chosen with the task of finding a suitable property. They found it on Elisabethenstrasse (today No. 26). On September 26, 1844 the strict house rules (see Wagner 1994, 11f.) were approved. Two days later, the New Alumneum was opened in the presence of representatives of the state, university and church authorities.

Thanks to the donations received and the voluntary payment of CHF 1'000.00 per year by the father of the house, Legrand, the cost money for the students could be kept low or adjusted to the respective circumstances. On 28 November 1844, the head of the Alumneum Commission, J. Burckhardt, was able to report positively to the Regenz of the University, and the Regenz acknowledged the effort with the decision to pay CHF 168.00 annually to the Alumneum from the old Alumnatsfonds.

The Alumneum at Elisabethenstrasse was soon too small with three rooms with four, three and two beds. Since October 1852, five to six alumni have been accommodated in the "Alumneum II", on the ground floor of a residential building on St. Johanns-Vorstadt (today No. 41, not far from the bridgehead).

Ursula Legrand-La Roche, the devoted housemother, fell ill and bequeathed to the Alumneum on the sickbed the extremely generous legacy of CHF 38,000 "which became the effective basis for its further development, in that the financing of the new accommodation on Hebelstrasse could be secured decisively" (Wagner 1994, 14).

From January 1853, the Neue Vorstadt property No. 264 (since 1871: Hebelstrasse No. 17) was purchased and renovated. The house was about 200 years old at the time. The land, which has been documented since the 14th century and on which once stood a vineyard with trot, was bought in 1630 by Theodor Burckhardt, the conductor of the Order of the German Knights and deputy of churches and schools. He seems to have converted the "housing" - probably a simple residential building - in the vineyard into a solid residential house (Wanner 1988, 70). In 1809 the property "with half of the well behind the house and a running sewage well" was sold to Niklaus Heusler, "who, however, sold it to his brother-in-law Peter Hans Hosch after only three years "together with garden, yard, horse stable and two open small sheds". Even then, the garden had an exit to the Petersschanze. The last private owner was the silk ribbon manufacturer Christoph Heinrich Sieber-Bischoff in 1818. It was Sieber who in 1853 offered the house to Hieronymus Bischoff-Bischoff, the shareholder of the Benedict Bischoff cloth shop in the "Zerkindenhof", for the Alumneum and sold it in the same year for 50,000 francs. (Wanner 1988, 70f.) After renovation and reconstruction work (see Wagner 1994, 15f.), the Alumneum was moved to Hebelstrasse in mid-August 1853. A large opening ceremony took place on 18 May 1854.

In 1972 the remaining 16 alumni moved into the then empty parsonage at Feierabendstrasse 1 (Wagner 1994, 67: 7) until the reopening in 1973, during which the refectory (Mensa) on Bernoullistrasse was built, major reconstructions and renovations took place (Wagner 1994, 68-72). The east wing was demolished and rebuilt. The former dining room became a library, music and recreation room, the former library and work room became the dining room of the alumni and the old music room became the students' kitchen. Until 1972 a cook cooked for everyone, but "the alumni who had stayed on Feierabendstrasse during the construction period had taken care of themselves there and, because of their good experiences, submitted the application to the Kommission [today: Foundation Council, editor's note], one should also set up the kitchen for self-catering in the renovated Alumneum" (Wagner 1994, 70). From then on, washing, ironing and repairing of house and bed linen was done externally. The cleaning of the common rooms is still done by a charlady. All Alumni rooms were single rooms from then on.

The conversions and renovations made it possible to realize two new concepts: keeping the house open throughout the year and accepting female students. Due to the new construction of the east wing, more rooms could be furnished for alumni than before. Students from other faculties had already been accepted from time to time. Since the building extension - and in connection with the decrease in the number of students at the Faculty of Theology - the Alumneum is open to students of all disciplines (see admission criteria).

In 1986 the Stiftung Theologisches Alumneum was allowed to accept a donation: the property St. Alban-Rheinweg 166 The former Alumneumskommission decided to "gently" renovate the house, which was "in an unkempt condition", and to make it available to married theology students, first of all those who attended the Kirchlich-theologische Schule [today no longer existent, editor's note]. But if there should be no theologians to be found, non-theologians could also be considered" (Wagner 1994, 77). Thanks to unexpectedly high donations from the church, companies and private individuals, the renovation of the house with four apartments was completed. In 2014, the Foundation Council decided to completely renovate and convert the house, which was again in need of renovation, to rent it out at market prices and to use the proceeds to pay housing subsidies to needy (theology) students or (married) student couples. The last students moved out in the summer of 2016, and in March 2018 the project was completed with a fully let house. 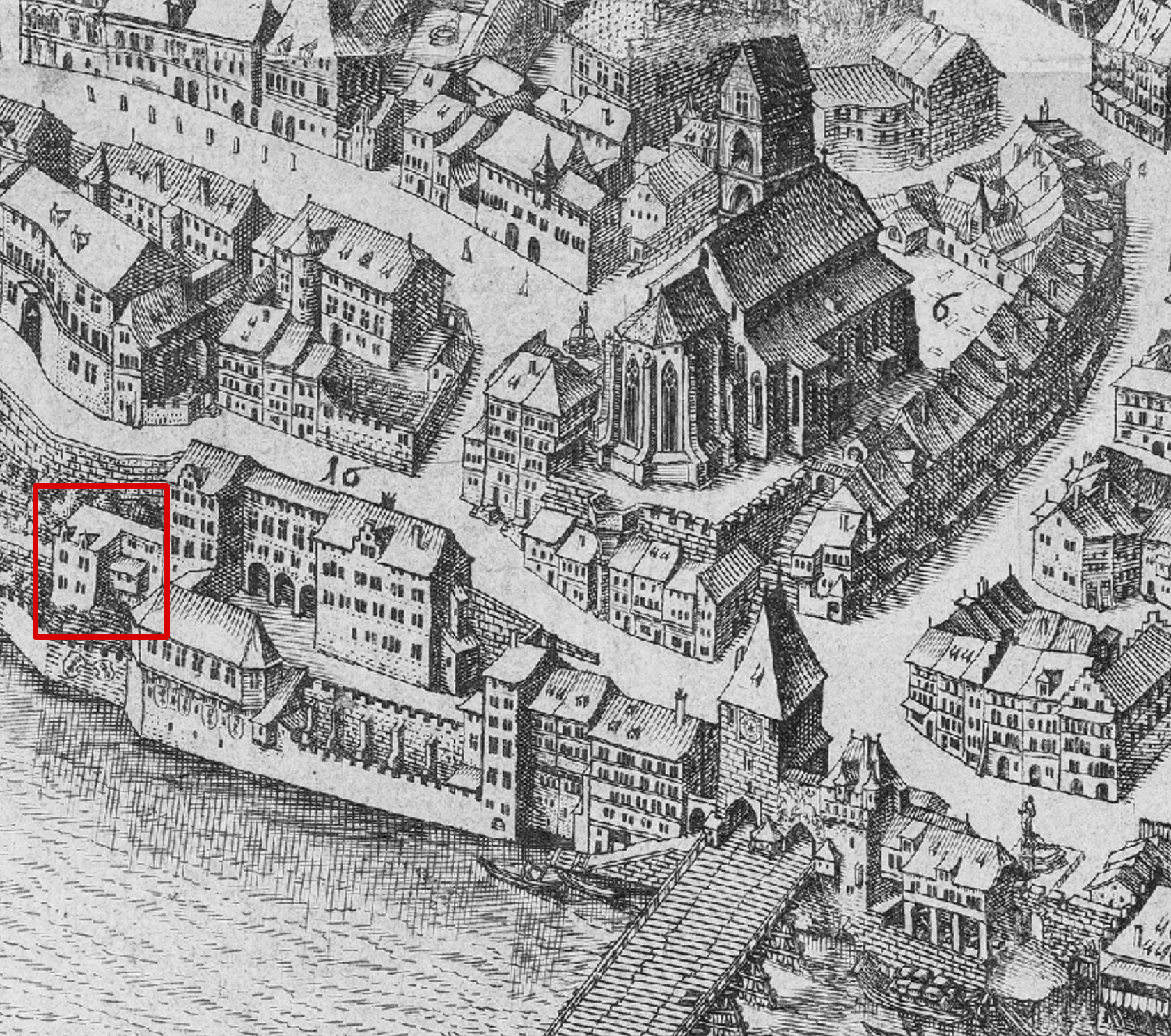 Burse (until 1529) in the «Unteres Collegium» of the Old University at Rheinsprung, map of Merian 1615. 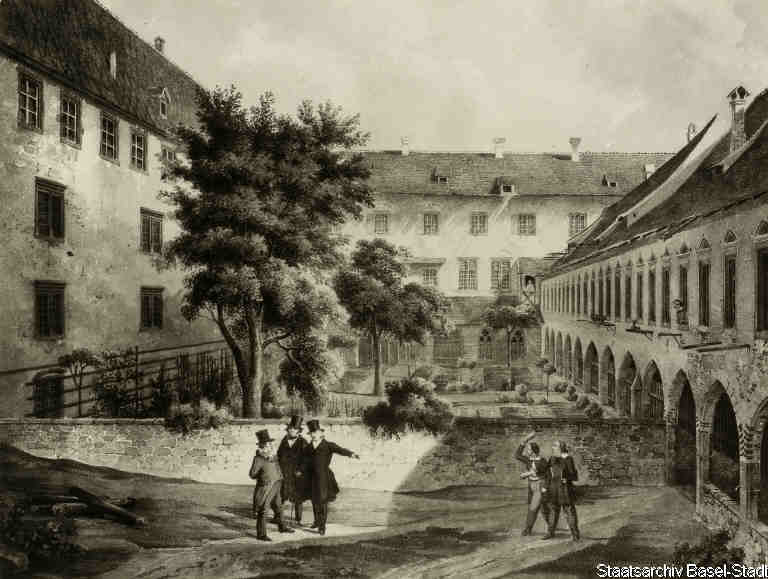 Augustinerkloster with the Old Alumneum in the 1st floor, at right. Drawing by J. J. Neustück ca. 1800. 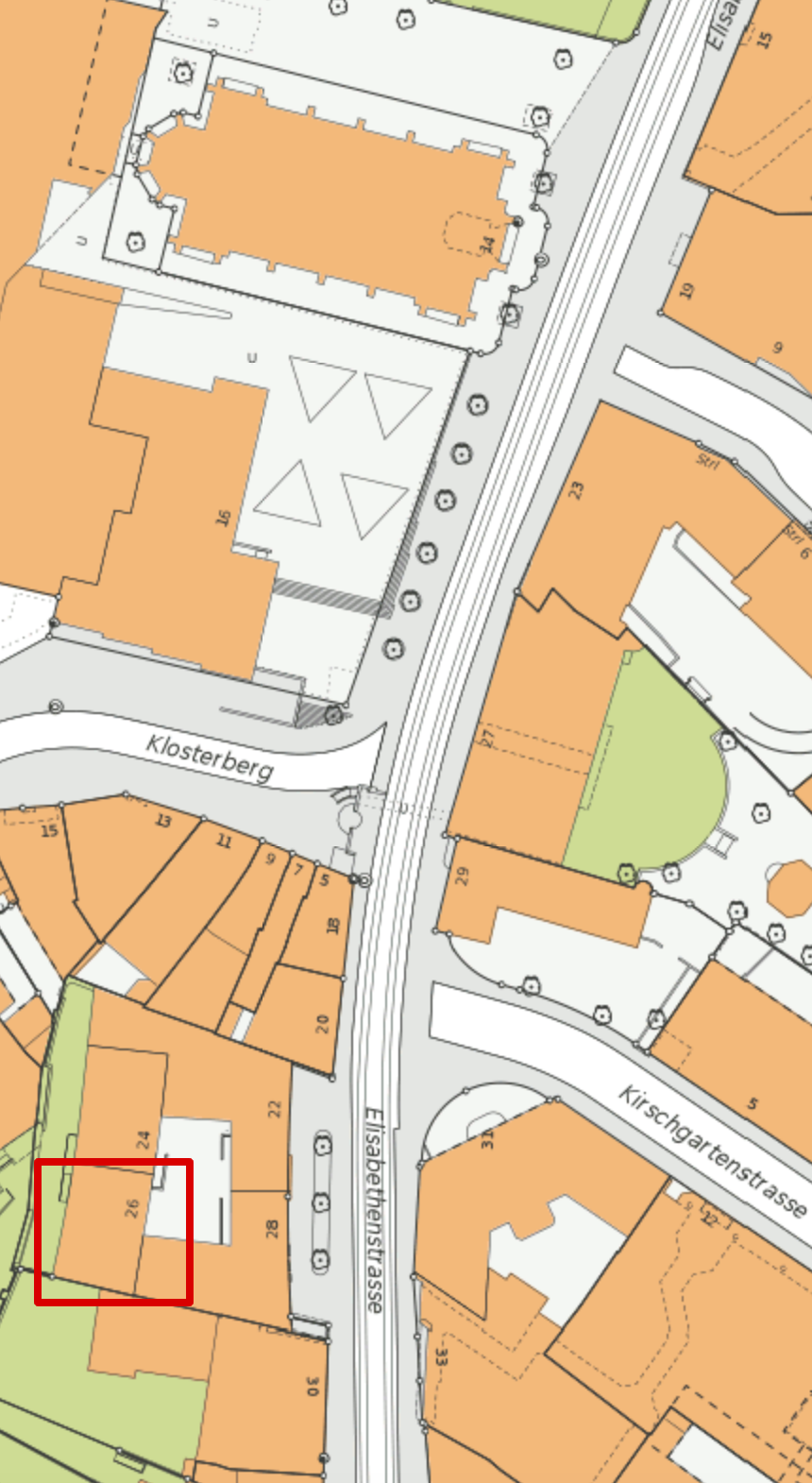 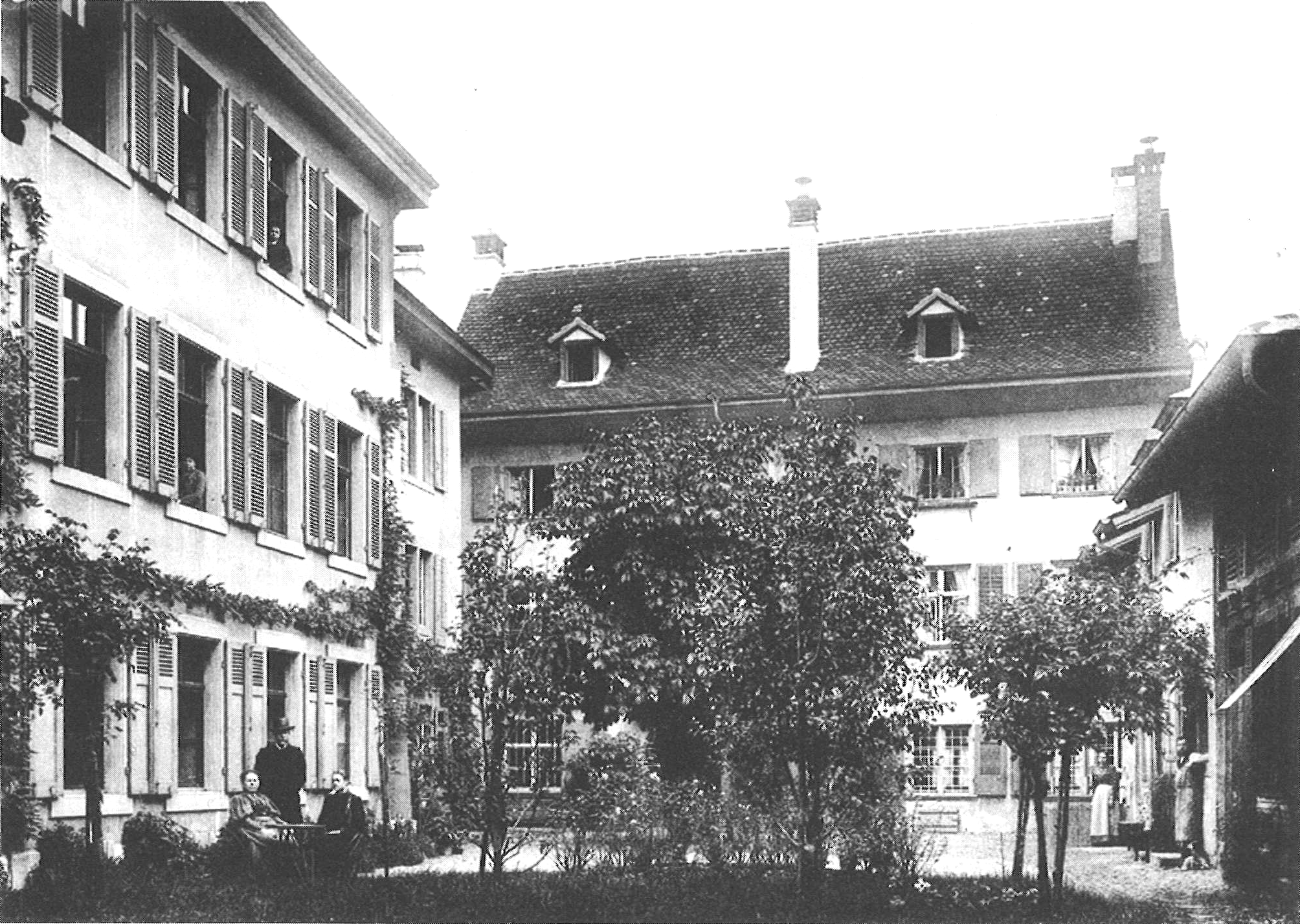 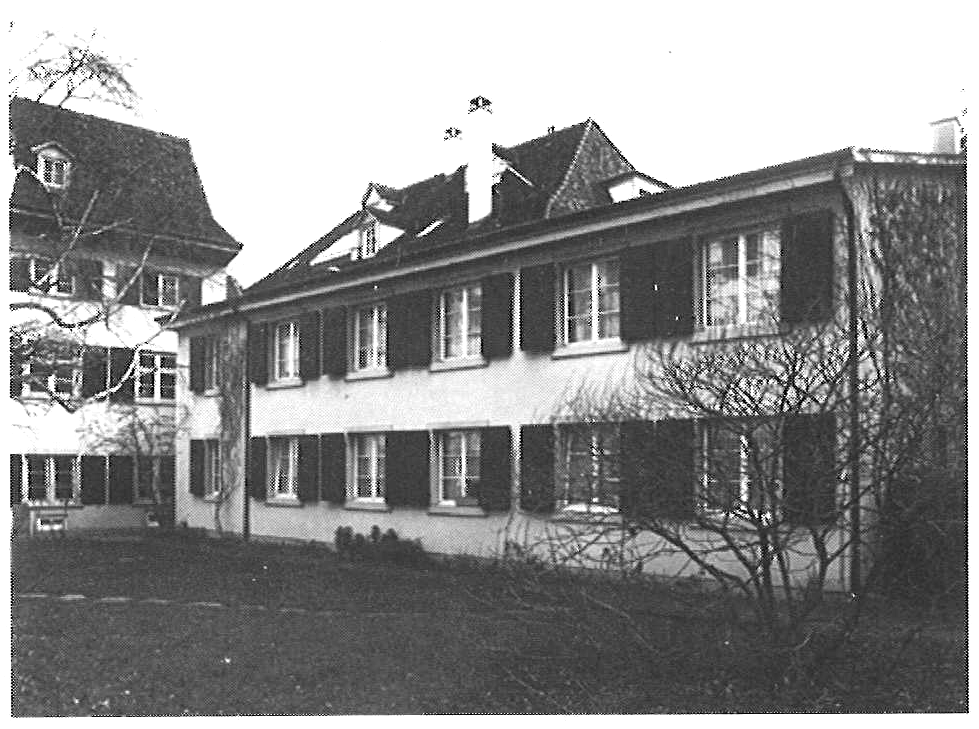 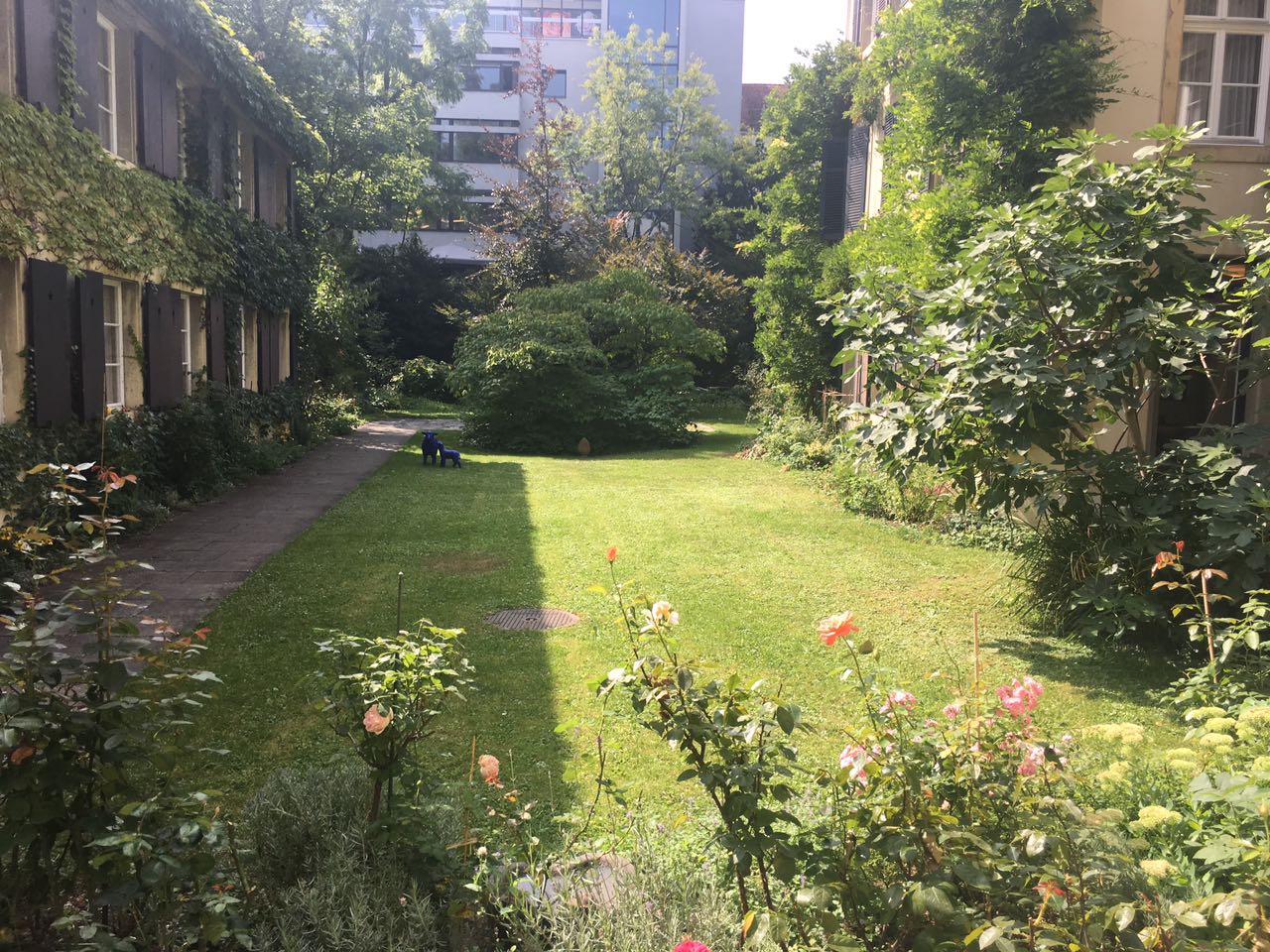 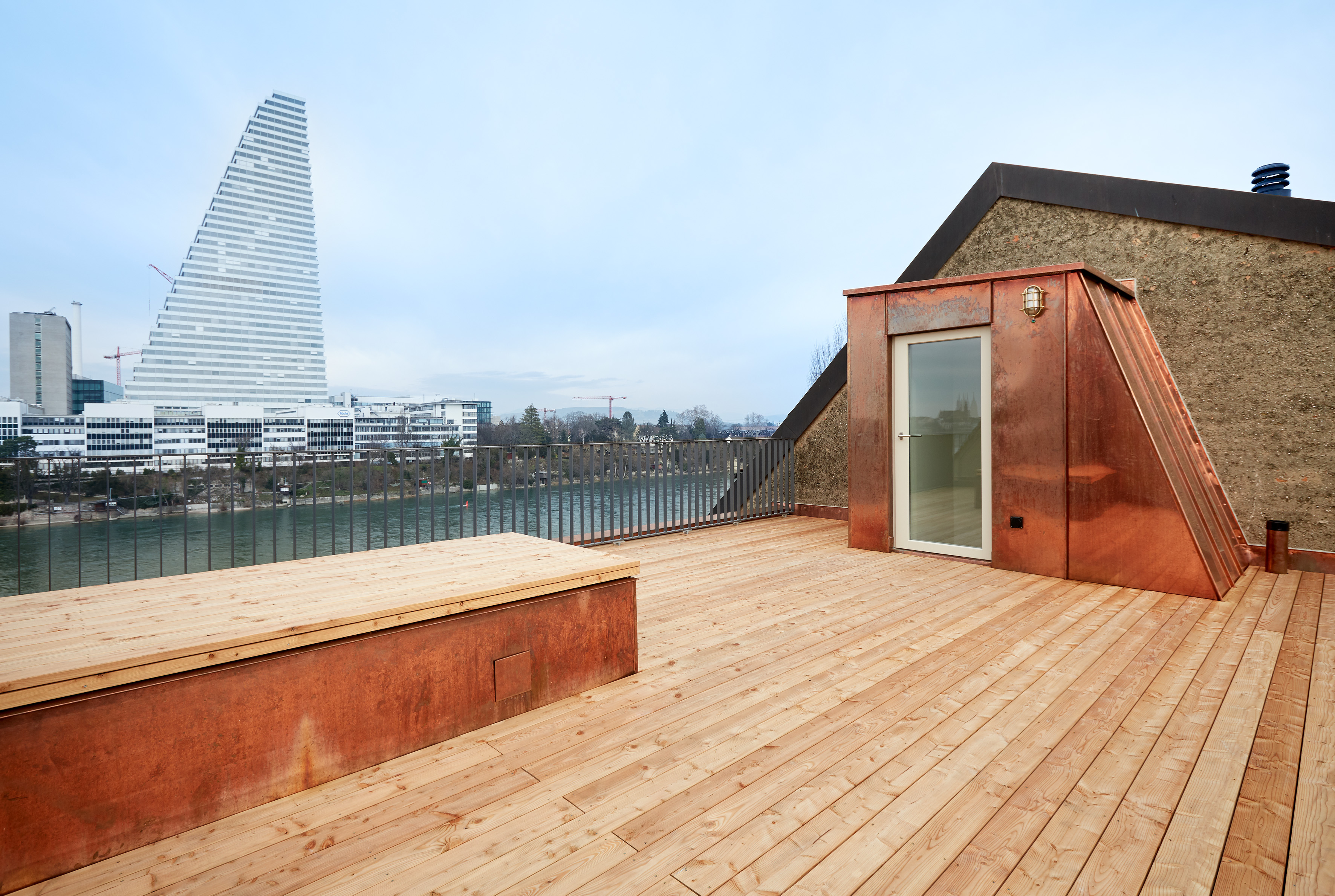 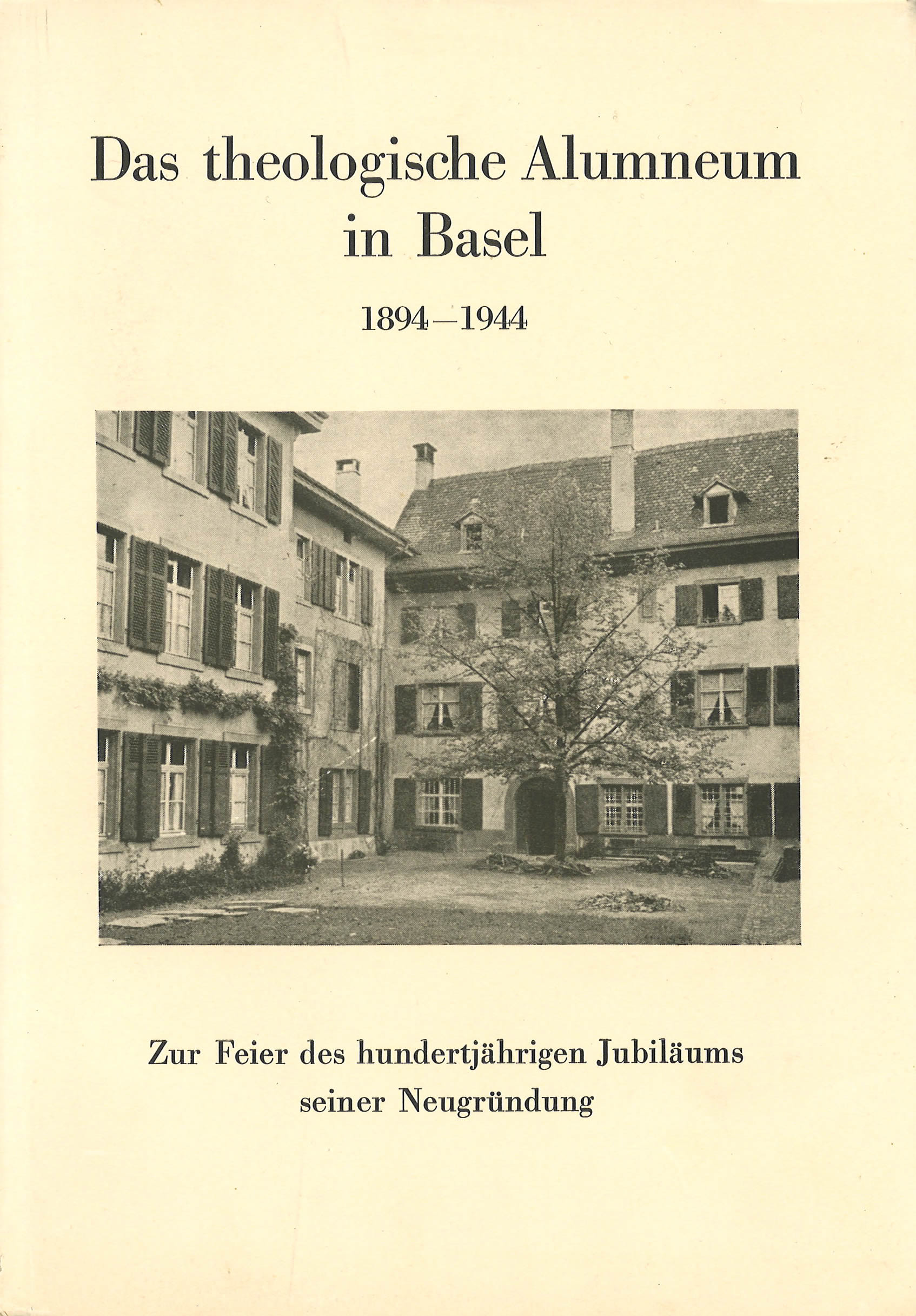 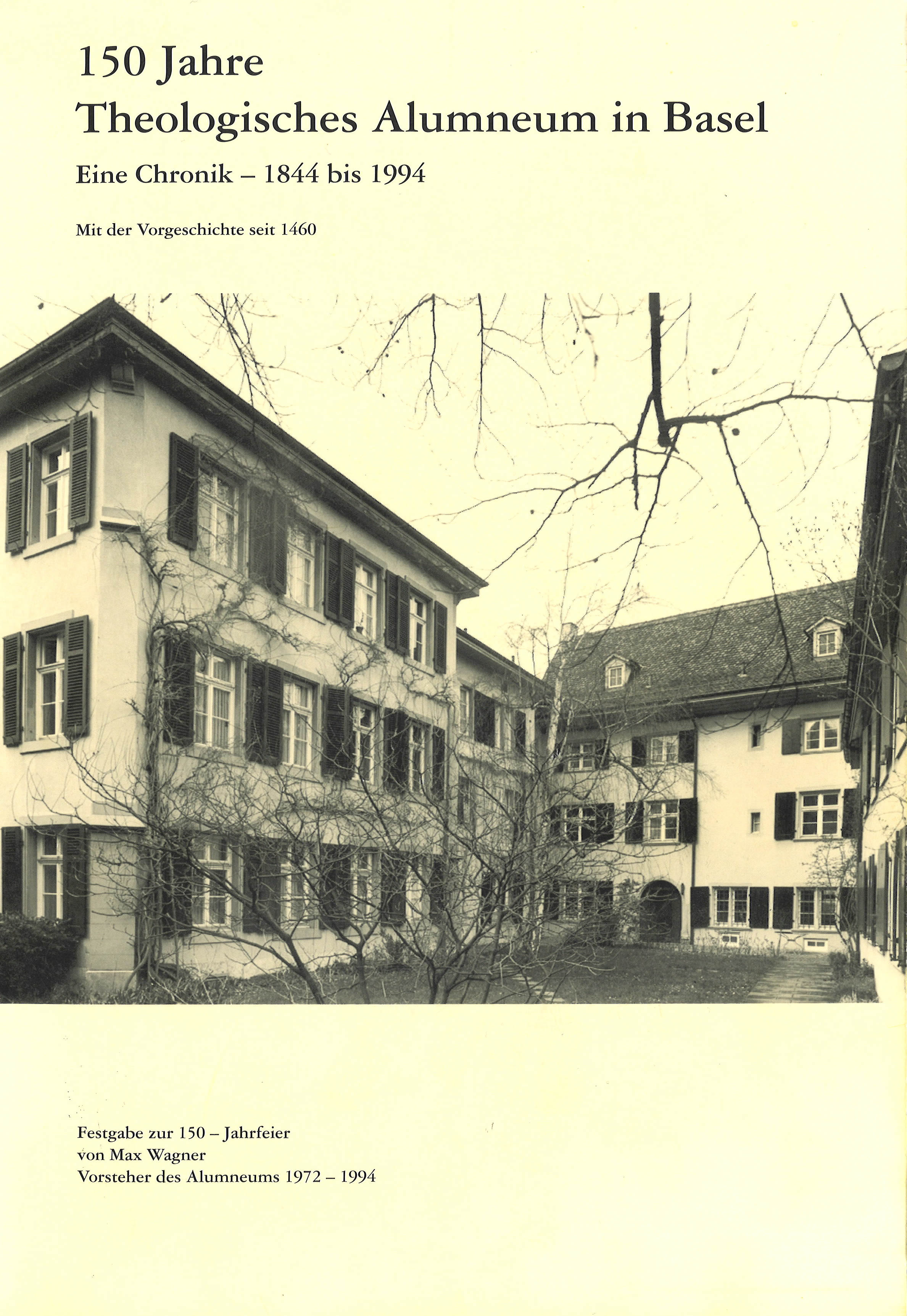